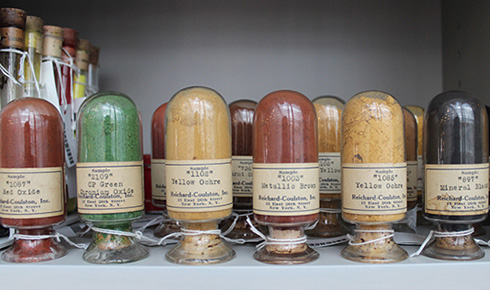 The history of pigments and colors dates back to ancient times. Edward Waldo Forbes, historian and director of the Fogg Art Museum at Harvard University, traveled around the world gathering pigments for the purpose of authenticating classical Italian paintings. Over the years, his color library, which became known as the Forbes Pigment Collection, grew to over 2,500 specimens, which came with a backstory on each one’s origin, production, and use. 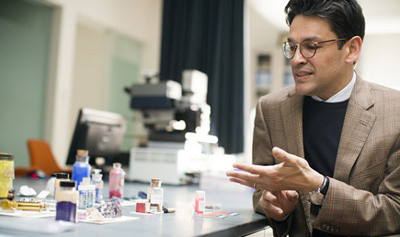 Currently, the color system is preserved at the Straus Center for Conservation and Technical Studies at Harvard Art Museums under the care of Narayan Khandekar (director of the facility) and used for scientific analysis only. Khandekar’s focus is to inject modern pigments into the current collection. “A lot has changed in the art world since painters worked with ‘colormen’—as tradesmen in dyes and pigments were known—to obtain their medium,” he explains.

“We use our instruments in the same way that forensic scientists do,” Khandekar says, describing how a pigment would be examined and cataloged. “We examine and find out what we can about the key compounds that will tell us the material’s origin.”

As mentioned earlier, every pigment has an origin story. Here are just a few of the stories behind a few of the most interesting pigments in the Forbes Pigment Collection: 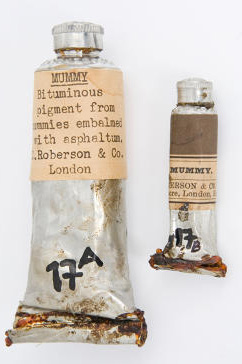 Mummy Brown: Popular in the 18th and 19th centuries, Mummy Brown came from… Well, mummies! Back when mummies were harvested and examined, brown resin from the material wrapped around the bodies would be extracted. From there, Mummy Brown was created.

Brazilwood: This rich red color comes from several tropical trees of the senna genus and is used to dye textiles and leather. The color is also used for inks, paints, varnish tints, and wood stains.

Annatto: This “lipstick” plant, Bixa orella, is native to Central and South America and is a natural orange dye which used to color butter, cheese, and cosmetics. 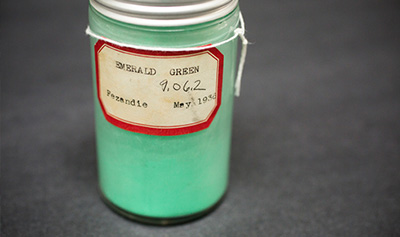 Emerald Green: This bright green color has been identified in a couple of Van Gogh’s works and is made from copper acetoarsenite, an inorganic compound that comes from a crystalline powder. It’s also used as an insecticide and seen in aged wood, such as the wood used for railroad ties.

Lapiz Lazuli: Popular across Europe and mined in Afghanistan, at one point this pigment was more valuable than gold.

Cadmium Yellow: The name of this color may be familiar, as you’ve probably used it while playing around with your Prismacolor pencil set, or even flipped through the swatch in the Pantone Color System. The origins of this bright pigment come from a heavy toxic metal, and it was introduced as a color in the 19th century.

So, next time you play around with Pantone Colors or put on your favorite shade of lipstick, think about where those colors might have come from. Chances are you might find them in the Forbes Pigment Collection!