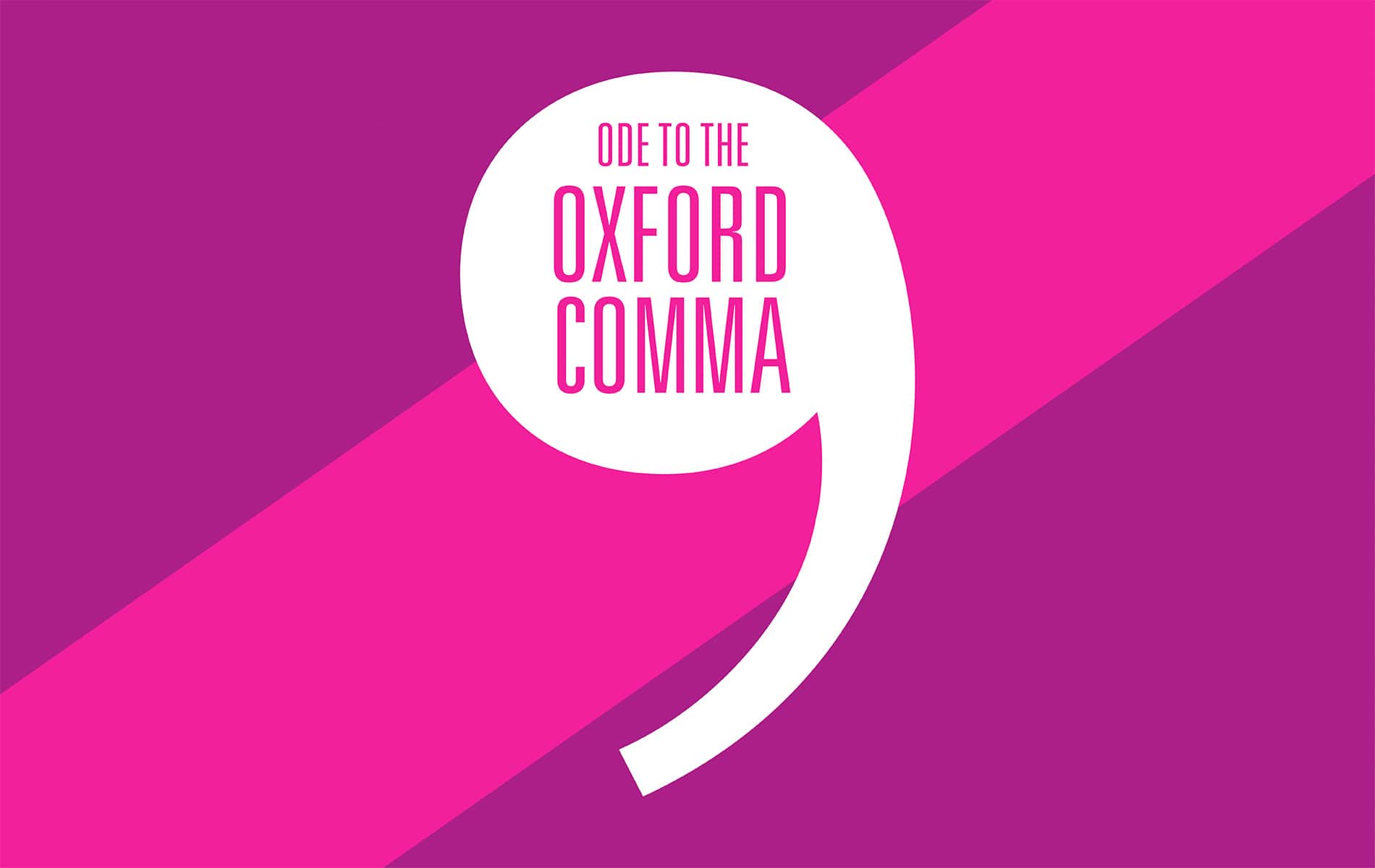 An Ode to the Oxford Comma

This editor is taking a stand.

In perhaps one of the most heated debates spanning the twentieth and twenty-first centuries, grammar pedants have argued the pros and cons of using the serial comma (a comma placed before the conjunction and final item in a list of three or more). The serial comma is also commonly known as the Oxford comma, as it is widely believed to have been introduced as a grammatical rule by Horace Hart of the Oxford University Press in his 1905 employee style guide.

On the one hand, you have the writers who would prefer to use the serial comma at all times, to avoid any confusion when it comes to the items in your list. To use an internet-famous humorous example: “We invited the strippers, JFK and Lincoln.” Obviously, there has been a big blunder here because the serial comma was not used. This is an extreme instance and meant to be funny, but the way the sentence reads infers that JFK and Lincoln are the strippers—not right! One little serial comma can save the writer (and these former presidents) from embarrassment: “We invited the strippers, JFK, and Lincoln.” It’s still a cause for concern among presidential standards, but at least we’ve cleared up who was invited.

For once in my life, I’m channeling the words of Lin-Manuel Miranda’s Hamilton: “I’d rather be divisive than indecisive.”

My ultimate argument is one of consistency. The Associated Press Stylebook, which serves as the overarching style guide for most newsrooms in the US, has long touted that the serial comma is not necessary except in cases, such as the presidential debacle mentioned above, where it is needed for clarity. In my experience as a writer for most of my life and an editor for nearly a decade, I have found that consistency in writing for a publication, client, or personal project is essential. Why would one sometimes choose to use an extra comma and other times to abandon it? This practice does little in the way of improving the flow of a sentence, and yet it could seem like a mistake if a reader notices the inconsistency. From an editing vantage, the inconsistent use is also presenting a more substantial opportunity for error. It’s much neater to use the serial comma in every instance to help close that margin in which you can make a mistake.

So, on which side do you fall? Perhaps you don’t care, and that’s alright. But If you’re a grammarphile like me, I hope you enjoy this:

“Ode to the Oxford Comma”

Small yet mighty, your nature is quite controversial

Among the scholars, journalists, and writers commercial

You seek no glory for yourself but are exalted nonetheless

Your quest is for clarity, as all good heroes must possess

Your origins are quite the unsolved mystery

They say Mr. Hart of Oxford put you down in history

Later, Peter Sutcliff named you in his material

(Up ’til then, your references were serial)

Oh, what a war there’s been, your name attached

A scrivener’s crusade whose likes are quite unmatched

From windswept Chicago to the AP halls they rumble

The force of comments make the walls of Facebook crumble

And as for me? Well, I side with Mr. Hart

The newsroom underappreciates your finer art

Certainly the most sensible option I can surmise

For although breaking rules is often fun

Consistency in published writing work is one

That should, at the very least, be heeded

We never want our readers to leave confused

This is why serial commas are used

The difference in my parents, God and Jill

Your role in writing heightens their potential

And in your hallowed name, my fight continues

I shall defend your place in books, websites, and menus

And to all those who would still disagree

I suppose the battle persists for typists, you, and me.